Click here to hear an audio recording of this sermon.

Brothers and sisters in Christ grace and peace to you from God our Father and Lord and Savior Jesus. Amen.

A little boy runs across a farmer who has a truckload of cow manure. The boy asks him what he is going to do with all of that cow poop. The farmer tells the little boy, “I’m taking it home to put on my strawberries.”

The little boy looks up at the farmer and says, “I don’t know where you come from sir, but where I come from we put cream and sugar on our strawberries.”

I’m not sure how much that joke has to do with our gospel reading today or even the sermon for that matter, but I’ve been gone for a few Sundays and thought it was kind of cute, so I figured I’d share it anyway.

This is the third Sunday in the season of Lent. In our gospel reading today, the crowds are saying some pretty crazy things to Jesus, aren’t they? About Galilean blood being shed in the temple by Pontius Pilot and intermingled with the blood of animal sacrifices on the altar because of their sin or a tower collapsing and killing innocent people because of their sin. But, we don’t say things like that anymore, do we?

During his first interview after this year’s Super Bowl, a reporter asked Ray Lewis from the Baltimore Ravens, “How does it feel to be a Super Bowl Champion?” Lewis responded, “When God is for you, who can be against you?”

Excuse me? God had a favorite team in this year’s Super Bowl? You mean God liked one of the Super Bowl coaches, the Harbaugh brothers, better than the other one?

Or how many times have you and I heard someone say or even thought this ourselves.

“The poor are poor. It’s their own fault. They should get a job.”

Or “The sick are sick. Maybe they should have taken better care of themselves and then they wouldn’t have gotten sick.”

Or how about those preachers on television who proclaim that natural disasters like Hurricane Sandy or Katrina happen because of the sins of people on the east coast or in the city of New Orleans.

Don’t those things sound a little like the crowds who confront Jesus today in Luke’s gospel? Evidently things haven’t changed much over the past 2,000 years.

I think Lent might be the most misunderstood season of the Christian church year. It often feels more like New Years Day to me rather than a season that walks us to Jerusalem and death on a cross. During Lent many of us give something up like chocolate or fast food or we try to exercise more or get more sleep. Like most of our New Year’s resolutions – many have all but disappeared by the time we reach week three.

You and I really want to change, and Lent always seems to be a pretty good time to give that a shot, especially because we’ve usually already abandoned our New Year’s resolutions by the time Lent begins on Ash Wednesday. But year after year, Lent after Lent, it comes and goes and the blood of old issues remains, buildings of bad attitudes continue to fall and hurt innocent people, and addictions continue to halt the bearing of good fruit from our trees.

Maybe instead of focusing on giving something up, we should look more deeply at what Lent may actually be calling us to be about. Especially in light of the text that we have before us today.

We often fall into the trap of assuming that our relationship with God through Jesus Christ depends upon us becoming something or changing into some sort of super hero Christian that is vastly different from who we actually are. That couldn’t be further from the truth.

I think sometimes Jesus needs to knock us upside the head and remind us of that once in a while. Remind us of all of the crazy things that we say and do and tell us, “You’ve got it all wrong.”  Or as Jesus says in verses 3 and 5 in our gospel today, “No, I tell you; but…” The “buts” in these two verses are important. They signal a turn, a turn away from worrying about the sins of others; and a turn to think about our own sins and our own life.

I found an insight from Pastor Todd Spencer helpful this week. He wrote, “Part of the adventure of Lent is recognizing how we have participated in unfruitful ways.” And he went on to say, “So we ask God who created us to forgive us, so that we may begin anew.”

Humorist Garrison Keillor eloquently stated a long time ago that, “You can become a Christian by going to church just about as easily as you can become an automobile by sleeping in a garage.”

During this week in Lent, and at all times in our life together in the Body of Christ for that matter, Jesus calls us to repent. And repentance is not about feeling a little bit bad or guilty for something we may have said or done with the hope that we will do a little better next time. Repentance is a radical reorientation of oneself; literally a “turning around” – a complete change of heart, a total change of direction.

So you and I shouldn’t worry necessarily about Lenten resolutions, because we’re being invited into something that is far more than that during Lent. We’re being invited to fully believe and live in the paradox that Jesus offers. In light of the chaos and calamities that can happen to any one of us at any time and in light of all sin that still exists in our world today, you and I are invited each and every day to call upon God to repair our own brokenness. Don’t assume that because you are still around on this earth it’s because you bear good fruit all the time and have no need to repent.

it; or the sin of someone else causing our own problems; or the sins of many causing horrific events like towers to fall or hurricane winds to blow. After all, at least then the world has a superficial explanation for why these things occur and someone else to blame.

The good news of the life, death, and resurrection of our savior Jesus Christ is not found in our ability to blame others for our own sin. The good news is that this Jesus offers you and me forgiveness, reaches into our very lives, reminds us of our roots, nourishes us with unconditional and abundant mercy and grace, and allows us to bloom, to flourish, to freely share our gifts with everyone we meet.

Brothers and sisters in Christ, Jesus calls you and me to repent. May that be the fruit that we bear during this third week of Lent. Bear good fruit. Amen.

Click here to hear an audio recording of this sermon.

Brothers & sisters in Christ, grace and peace to you from God our Father and our Lord and Savior Jesus Christ. Amen.

I’m grateful to be with you today. I began traveling home from El Salvador with the Mission Team from Good Shepherd at 4 o’clock in the morning this past Sunday. After a lengthy and unexpected weather delay in Denver, we finally made it back to Bismarck yesterday. Needless to say it was a long trip home. I’ll share more about our ministry in El Salvador in the coming weeks. I thank you for your prayer for this mission team and for the relationships that continue to grow between Good Shepherd and our brothers and sisters in Christ in El Salvador. And we look forward to Pastor Carlos Najera’s visit to Good Shepherd on March 16-17. Pastor Carlos serves Cristo Rey Lutheran Church In Santa Ana, El Salvador.

During the past two Wednesdays of our lenten worship series we’ve explored a few of the clichés that we hear in Christian community. “Everything Happens for a Reason” and “God Won’t Give You More Than You Can Handle”. Together we have discovered that, even though it may seem that these words comfort those who are experiencing a difficult time in their lives, they can actually be more harmful than helpful. And so we continue today and explore another Christian cliché – “God Must Have Needed Another Angel in Heaven”.

God Must Have Needed Another Angel in Heaven? This cliché is a challenging one for me. Simply stated it’s because I have experienced it’s use first hand. A few years ago, my niece, who had not celebrated her 2nd birthday yet, died unexpectedly. I do not believe that she died because God needed another angel in heaven. The pain that her parents and my entire family experienced during that time does not make me think of cute little angels with wings flying around.

Losing a child is every parent’s worst nightmare – whether that child is 53 years or 15 months old. The pain that accompanies the death of a child is incomprehensible. An experience like this can cause grieving parents and family members to have a spiritual crisis. Some will even question the very existence of God. How can God cause my child to die? Where is God in this?

Brothers and sisters, these are very real questions.

When I have walked through a time of grief myself or have visited with someone about a time of grief that they have experienced, there is one common theme that I hear without fail. Comfort didn’t come through fancy clichés. Comfort came through the simple presence of someone who loved them and cared about them.

And if you feel like you really need to say something, say something that doesn’t judge or try to explain. Simply say “I’m sorry for your loss.” or “How can I pray for you?”.

This young grieving couple said that by asking a question like “How are you doing today?”, and then really listening to their answer, made them feel like the people who loved them were entering into the experience with them. They said, “We knew that they genuinely wanted to know how we were doing and we could be honest with them and know that we weren’t looking for an explanation. We just needed to know that they cared. That was more than enough.” 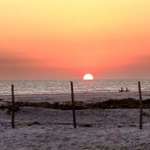 And as followers of Jesus Christ, we have the opportunity to be the presence of Jesus for others. Not by having to say something or do the “right” thing, but by simply being present. Brothers and sisters in Christ, be present for someone this week. Amen.

NOTE: Good Shepherd’s Wednesday worship series, “Love the Sinner. hate the Cliche.”, is adapted from a series of the name from our friends at Changing Church Forum from Prince of Peace Lutheran Church in Burnsville, Minnesota.