Brothers and sisters in Christ, grace and peace to you from God our Father and our Lord and Savior Jesus the Christ.

How are you doing so far in our Lenten journey through the book of Hebrews? Hopefully you’ve been able to participate beyond our times together in worship. And hopefully you have grown in your relationship with each other and with God through our time in this challenging book of the New Testament. Today, our worship theme is Jesus is Greater Than Our Sacrifice.

Sacrifice – it’s kind of tough word, isn’t it? Sacrifice. It just sounds tough. But sacrifice is a fairly normal part of our language and life in many ways.

A great athlete might sacrifice to be the best athlete in their sport – even at a cost of destroying their body.

A brilliant business person might sacrifice in order to stay on top of the business world – even at a cost of destroying other people or making unethical decisions in the quest for profit and power.

A successful salesperson might sacrifice in order to build enormous wealth – even at a cost of healthy relationships with their family or friends.

There are no less than 200 references to sacrifice in one way or another in the bible. The book of Leviticus – which if you have ever studied and read in its entirety, well…first of all – good for you! That’s not an easy thing to do! “Leviticus claims to contain the ‘statutes and ordinances and laws’ that God gives to Israel through Moses” (Lutheran Study Bible, pg. 189).

So, if you’ve read the book of Leviticus, you may have noticed that in the first 7 chapters, the writers lift up 5 different kinds of sacrifices or offerings that were important to the people of Israel. The burnt offering. The grain offering. The peace offering. The sin offering. And the guilt offering. If you own the Lutheran Study Bible you can learn more about these offerings and the sacrifices that relate to each of them on page 197.

In relation to that, I am quite certain that I’ve never received a male sheep or goat without blemish as an offering during worship. An offering that would then involve me killing the animal and burning it on the altar for the forgiveness of sin. Which would have to happen if we are staying true to the instructions from God found in Leviticus. This sacrifice supposedly creates an odor in the tent of meeting that is pleasing and honoring to God. If you think burning the palms on Ash Wednesday stinks a little, imagine what burning a goat on the altar during worship might smell like.

It’s said that during the festival of Passover there would be 100’s of thousands of people bringing something to be sacrificed on the temple’s altar. So much so that the streets of Jerusalem and rivers around it would be red with the blood of sacrifices being made throughout the festival.

For literally thousands of years, the altar was not an artistic piece of fine furniture in a holy space dedicated to worship. The altar was a place of great brutality and blood with sacrifices and offerings that ranged from grain to animals to even first-born children. And in spite of the altar’s extreme brutality, it was also big business for people like the Sadducees who ran the temple and collected the sacrifices that people brought.

Into this story of brutality and profiteering in the temple steps Jesus. It happens near the end in the gospels of Matthew, Mark, and Luke and near the beginning in John. Upon entering the temple, turning over tables, and chasing out the money changers Jesus proclaims, “My house shall be called a house of prayer, but you are making it a den of robbers” (Matthew 21:12-17).

In one fail swoop, Jesus forever destroyed the idea that blood thirsty sacrifices in the temple were needed in order to keep God happy. Of course this was incredibly confusing to those who saw sacrifice as a way of faithful living. In many ways, I think it still confuses us today as we continue to think we have to sacrifice something in order to be successful or feel like we are loved. After all, the idea of sacrifice was something that God had commanded God’s people to do in the first place! Why wouldn’t this still be true today. But as God comes to us in Jesus – the temple is now to be a place of healing and prayer. Peace. Not blood.

In every instance of Jesus being challenged by anyone – he responds with non-violence. Maybe this is first and foremost because the altar in the temple was seen as a place of violence. And rulers controlled everyday people with violence for centuries in order to keep control. And in many ways, that is still true today.

Jesus doesn’t come swinging swords and leaving a trail of blood in his path. Jesus, came as an infant in a manger. Jesus came in peace. And Jesus changed the idea of sacrifice as it connects to our relationship with God – forever.

If you’d like to dig a little deeper into our theme today of Jesus is Greater Than Our Sacrifice, I can’t recommend to you strongly enough a DVD lecture by Pastor Rob Bell called The Gods Aren’t Angry. You can find it on YouTube or on Pastor Rob’s website. I think it is just fantastic. 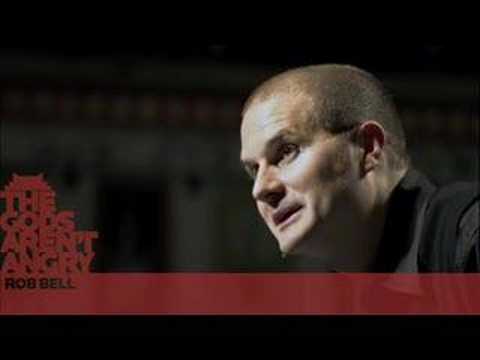 During this lecture, Pastor Rob references the writer of the book of Hebrews many times. He says that one of the most difficult questions that has plagued humankind since the fall of Adam and Eve in the Garden of Eden is, “What do I have to sacrifice or offer so God will love me and look upon me with favor? The reality is that God loves you and looks upon you with favor because of what God has done for you, and for me, through Jesus.”

It’s no longer possible for us to think that the blood of bulls and goats will take away sin.

Only Jesus Christ, the savior of the world – who lived, died, and rose from the dead can forgive sin.

God has made peace with all things in heaven and on earth through Jesus.

And maybe that will cause you and I to sacrifice a few hours this week in order to spend a few precious extra minutes with family or friends. That’s a sacrifice that may even bring you closer to your savior. And for the change that kind of sacrifice can bring to our faith journey and the crazy world in which we live today, I give God thanks and praise. Amen.